For the last few years MJ Paranzino has run two choirs that she founded, The South London Choir and The Brighton City Singers. Every summer they put on a concert as part of the Brighton Fringe at which they only sing new compositions. They put an open call out for composers to write choral pieces that have to be learned and rehearsed in a very short space of time.

In This World Before

The first piece, for the theme ‘The More Things Change, The More They Remain The Same’ is an adapatation of a track from the Mountains ep, Himalaya. I was casting around for some inspiration when I came upon a mention of a blog dedicated to a day-by-day posting of Samuel Pepys’ Diary. At the time the papers were filled with dire discussions of global warming…

Monday 21 January 1660/61
This morning Sir W. Batten, the Comptroller and I to Westminster, to
the Commissioners for paying off the Army and Navy, where the Duke of
Albemarle was; and we sat with our hats on, and did discourse about
paying off the ships and do find that they do intend to undertake it
without our help; and we are glad of it, for it is a work that will
much displease the poor seamen, and so we are glad to have no hand in
it. From thence to the Exchequer, and took 200l. and carried it home,
and so to the office till night, and then to see Sir W. Pen, whither
came my Lady Batten and her daughter, and then I sent for my wife, and
so we sat talking till it was late. So home to supper and then to bed,
having eat no dinner to-day. It is strange what weather we have had
all this winter; no cold at all; but the ways are dusty, and the flyes
fly up and down, and the rose-bushes are full of leaves, such a time
of the year as was never known in this world before here. This day
many more of the Fifth Monarchy men were hanged.

I put the base version together and MJ valiantly helped me organise my rudimentary notes into something singable by 150 voices.

This is a fairly poor audience recording…

The next year had ‘Food Of Love’ as the theme. For this I figured adaptation was the way to go again, took another Mountains piece, K2, and concentrated on finding a poem about music (it being the food of love, apparently). It didn’t take long to find Byron’s Stanzas For Music. With judicious editing it fit fairly well:

None of Beauty’s daughters
With a magic like thee
Like music on the waters
Is thy sweet voice to me
When, as if its sound were causing
The charmed ocean’s pause
The waves lie still and gleaming,
The lulled winds dream

And the midnight moon is weaving
Her bright chain o’er the deep,
Whose breast is gently heaving
As an infant’s sleep
So the spirit bows before thee,
To listen and adore thee,
With a full but soft emotion,
Like the swell of Summer’s ocean
Lord Byron

Here’s my first attempt to sketch out the basic melody.

MJ again helped with the arrangement of the voices, getting carried away with a kind of African thing, which gave the actual concert a Lion King moment as she made the audience sing it…

Last year the theme was ‘Sex & Drugs & Rock & Roll’. I broke it into 3 sections, one for each, choosing archetypes. Who embodies sex in music better than Earth Kitt, who was still alive when I started writing? Called ‘the most exciting woman in the world’ by Orson Welles, her best known hit was Santa Baby. My favourite, however, is C’est Si Bon, so I stole the bass line and adapted some of the words, aiming for a kind of Pink Martini feel to the music. Due to the many paens to Marijuana in popular music, the herb seemed the best fit for drugs. I had written a grungy, slow blues instrumental so looked for something that fitted, and found the words to an unreleased Janis Joplin song called Mary Jane. Again I adapted some words, wrote others and then went looking for the final part. No-one says Rock & Roll to me like Jerry Lee Lewis, even more than Elvis Presley or Little Richard. His gloriously unrestrained ode to the joy of lust fitted with my idea of ending with a raved-up Gospel shout-out, using the chorus of Great Balls Of Fire repeated over and over. Here’s the first version, just to work out the basic voicings…

Cocktails With Leo & Bill At The Windows On The World

This year, the theme is Walls Of Sound, celebrating great and iconic buildings. In 1986 we visited New York at the end of a trip around the States to the West Coast and back. We had arranged to meet our friends Leo and Bill and when we got to their apartment they decided that we should go and have a drink in the bar at the top of the World Trade Center. It was astonishing. We marvelled at the view as the sun went down, seeing if we could spot
where they lived (we could), and generally feeling vibrantly alive in the city that never sleeps. So this is a tribute to that feeling, and those buildings. This is the instrumental track.

Cocktails With Leo And Bill At The Windows On The World

Here are the lyrics 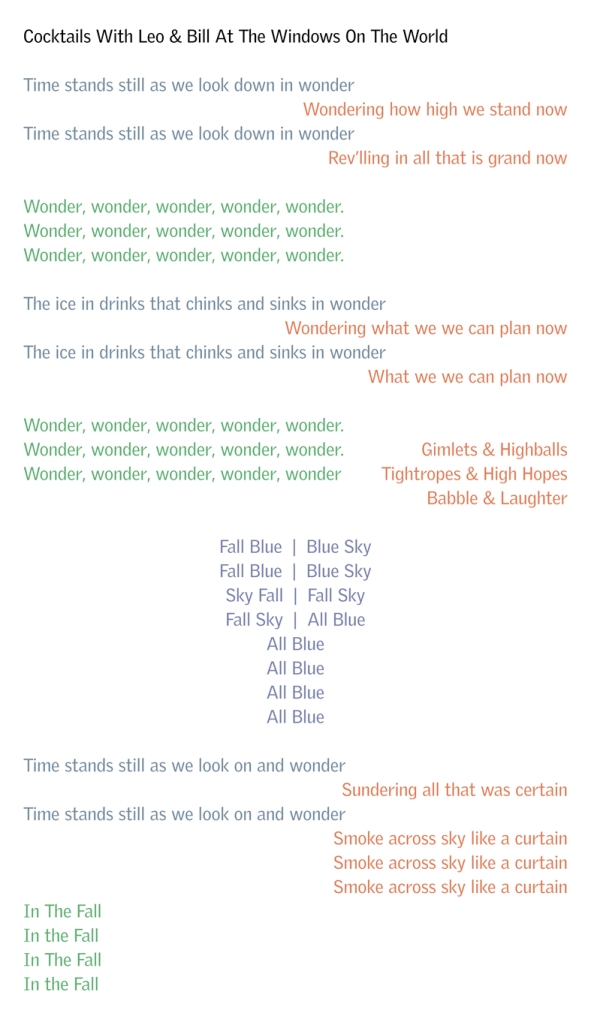 Here’s the pdf of the score for the voices